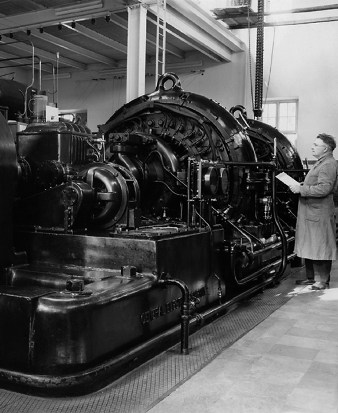 Today, with its alternator and multiple tuned antenna for longwave transmission, Grimeton Radio Station is unique as the only radio station remaining from the time prior to high-power radio tubes, i.e. before shortwave transmission gained prominence.

Grimeton Radio Station (call sign SAQ) began operating in 1924, primarily to facilitate telegraphy with the US. After experiencing severed cable connections during WWI, the Swedish Parliament decided in 1920 to erect a large-scale radio station on the west coast for wireless telegraphy that used longwave transmissions. This would prevent any similar disruptions to communications by making Sweden independent of other countries’ cable networks. For precisely this reason, Grimeton Radio Station experienced a boom during WWII. Cable connections had again been severed and wireless telegraphy became Sweden’s primary means of communication with the world.

Grimeton Radio Station formed part of a worldwide network of longwave stations designed by Ernst Alexanderson. Today it is the only one remaining. A few times each year a telegram is transmitted from the radio station, using the old transmitter, and the are many

. Read more in Listening to Grimeton