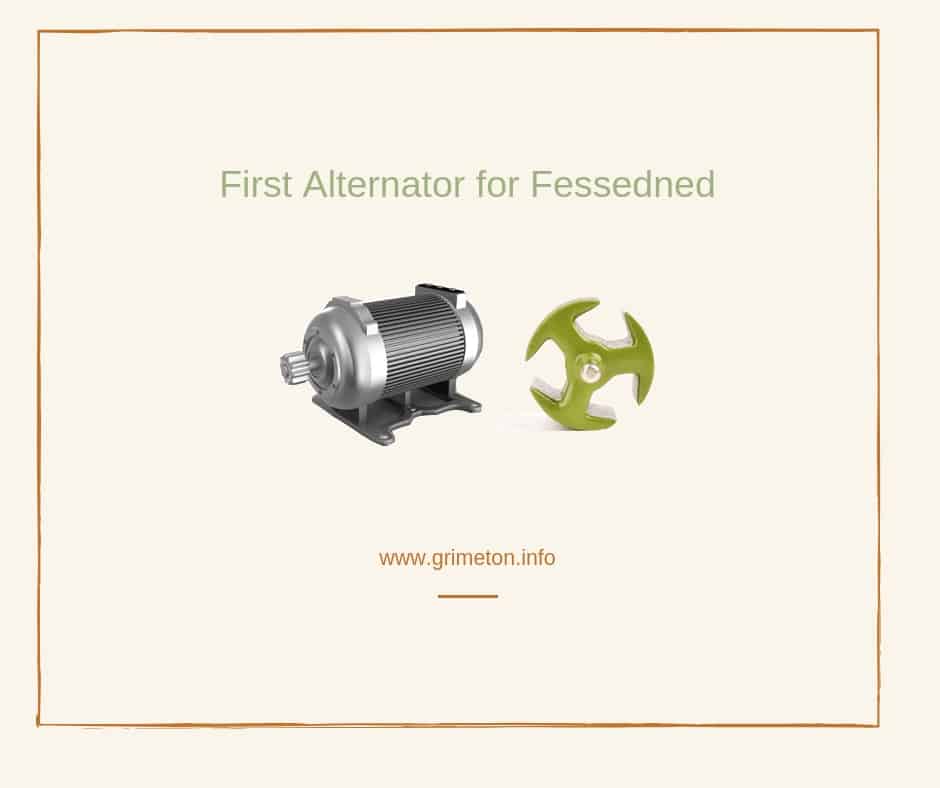 The Weather Bureau of the United States Agriculture Ministry employed him in 1900 in order to examine the possibilities of wireless to spread weather information. Fessenden thought that it should happen through direct speech transfer. In other words not by wireless Morse telegraph, according to the Marconi’s system, but by a continuous carrier wave, which the human voice would modulate via a microphone. He tested this in 1901, and at that time used a microphone from a telephone. The experiment was repeated in 1902 with an electrolytic detector, which was considerably more sensitive than the previously used coherer. Here was born the principle of broadcast radio, before electron tubes had been invented.

When Fessenden placed his order he had found some financiers who were ready to invest an appreciable sum on his ideas, if he granted them his patents and his work force. Thus was formed The National Electric Signaling Company, which was in fact behind the order to General Electric.

No one had previously succeeded in generating other then very small power at so high a frequency as 100 kHz. The earlier alternators (high frequency rotating machines) were suitable for arc lamps, when one wanted to avoid audible tones that arose at normal line frequencies of 50-60 Hz. In order to entirely avoid this disturbance, frequencies of 10,000 Hz or more were required.

Nikola Tesla and Elihu Thomson, among others, designed alternators for this purpose. William Duddell and Ernst Ruhmer designed in 1905 alternators for a high number of cycles per seconds, but with very small power. Duddell’s generator gave 0.2W at 120 kHz and Ruhmer’s gave 0.001 W at 300 kHz.

Fessenden’s requirement was therefore of such a magnitude that General Electric’s established designers shook their heads and gladly transferred the project to the “immigrant” to try the impossible, and he was crazy enough to undertake the task, as Alexanderson afterward expressed it.

Alexanderson’s manager for this assignment was Steinmetz’s co-worker Ernst Julius Berg. He had arrived from Sweden in 1892 and found employment at General Electric, where he stayed until 1909. Later he became professor and Head of the Electrical Engineering Department at Union Colleges in Schenectady. To start with he was the one helping Alexanderson to get personnel and equipment for testing new designs, and together with Alexanderson corresponded with Fessenden. The friendship between Berg and Alexanderson continued through the years. In addition to his work for General Electric, Alexanderson taught courses in advanced physics at Union College.

In Berg, Alexanderson found a manager with great ability and drive. Steinmetz tells of how he gave Berg an assignment to cope with a problem testing a transformer, but added that Berg was on no account allowed to overload the transformer. Berg examined possible failure modes and then increased the load gradually, until he reached the highest expected level. Then he telegraphed to Steinmetz “may I load the transformer to it’s peak?” and got the immediate reply, “I understand that you have already done this. Report the result.”

Fessenden had a forceful personality, both physically and emotionally. He was very dominant and given to hasty decisions regarding those working for him. Almost every week he dismissed the entire work force when he felt they did not meet his expectations of effort, only to employ them all again the next day.

His cooperation with Alexanderson was, however, without any personal friction. From preserved letters it nevertheless stands clear, that Fessenden’s differing design proposals mostly met with objections from Alexanderson, and that new counterproposals were prepared by him. For instance, in February 1905 Alexanderson wrote to Berg and gave views about those proposals that Fessenden had expressed in letters. Alexanderson considered, among other things, that a rotor core of iron is to be preferred to Fessenden’s proposal to use a wooden frame for rotor wiring. Nevertheless he was ready to test Fessenden’s proposal, but enclosed some sketches showing how he would design a generator with a rotor core of iron. He gives reasons for a different pole division from that outlined by Fessenden, and criticizes also part of the calculations of those mechanical stresses that arise from the high number of turns that was expected. At the end of the letter, he refers to a sketch that Fessenden has made, where he combined three rotary fields and expected to get a resultant field with a frequency three times as high. “If I understand him correctly, he is totally mistaken. Three sine waves in combination give simply another sinusoidal wave of the same frequency,” Alexander-son ends the letter.

In this manner, the discussions continue between Fessenden and Alexanderson through letters and at personal meetings. General Electric delivered a machine with a “wooden frame” according to Fessenden’s wish and according to Alexanderson’s blueprints. The generator obtained a power output of 1 kilowatt, but due to certain difficulties connected with “the wooden frame,” a frequency of 50 kHz was realized instead of the desired 100 kHz.

Check out our previous post about Ernst Fredrik Werner Alexanderson.